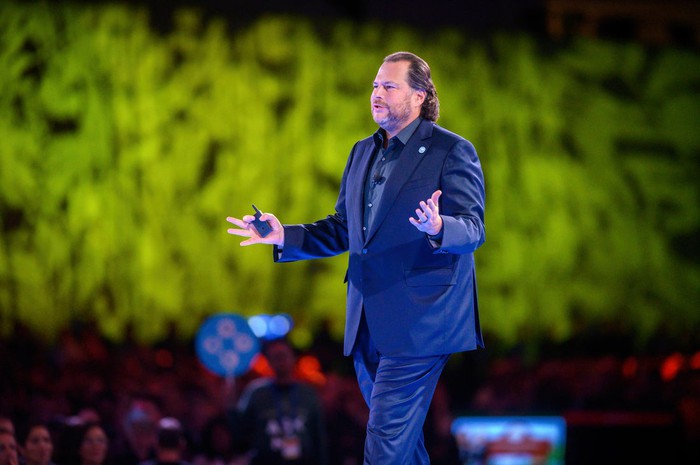 The company’s much-ballyhooed event is coming to the finish line. Here’s what investors learned.
salesforce.com (NYSE:CRM) is starting to wrap up Dreamforce, its biggest event of the year. The annual happening is part investor meeting and part user conference — with a little pep rally thrown in for good measure. The event had 2,700 sessions and workshops and drew 170,000 people to the customer relationship management software company’s headquarters in the San Francisco Bay area last year, and the 2019 event was expected to be bigger still.
Historically, there has been an avalanche of information for investors that comes out during Dreamforce. Here are three of the biggest takeaways for shareholders as the event draws to a close.

1. It plans to double revenue by 2024
For fiscal 2024, Salesforce is forecasting revenue in a range of $34 billion to $35 billion. This implies a growth rate of about 20% annually — an impressive feat for a company with a market cap of more than $142 billion. What’s even more impressive is that this is roughly double the $17 billion the company expects to generate to close out this fiscal year.

This isn’t the first time Salesforce has set its sights on this particular benchmark. Earlier this year, the company said that for the fiscal year 2023, it was forecasting revenue of $26 billion to $28 billion, roughly double the $13.3 billion achieved in fiscal 2019.

Considering the company’s historical results — it grew revenue by 26% and 25% year over year in fiscal 2019 and 2018, respectively — its claims have a ring of truth.

2. The MuleSoft acquisition is starting to pay off
Salesforce acquired MuleSoft in early 2018 primarily because of the company’s success at extracting data housed on legacy computer systems. Since then, Salesforce has worked to integrate MuleSoft’s capabilities more deeply into its suite of products.

More specifically, MuleSoft develops application programming interfaces (APIs) that bridge the gap between older systems and newer ones, allowing them to communicate more effectively and integrate data from across a variety of systems.

At Dreamforce, execs announced a number of new services that will attract more Salesforce customers to MuleSoft’s offering. Most importantly, the company introduced Accelerators, which allow customers to integrate data from outside sources directly with Salesforce Service Cloud and Salesforce Commerce Cloud. Additionally, the company debuted Flow Designer, which allows users to navigate a smart integration platform, eliminating the need to write complex code to unlock legacy system data.

3. The pace of acquisitions will slow
Over the past couple of years, Salesforce has turned to acquisitions to help boost its growth. The company acquired Tableau Software for $15.7 billion earlier this year, after paying $6.5 billion to acquire MuleSoft in 2018. While the deals have had the desired effect on growth, they come at a cost: Salesforce has seen its margins slip in recent years as the company worked to integrate its latest additions. There were also concerns that the accelerated pace of acquisitions acted to mask slowing organic growth.

Management indicated the pace of acquisitions would likely be slower this year as it worked to incorporate Tableau Software into its ecosystem. This could give the tech giant time to improve its margins.

It’s important to note, however, that Salesforce has already invested in a number of smaller companies that could eventually be future acquisitions. In a recent regulatory filing, it disclosed that it has taken stakes in Dropbox, Survey Monkey-parent SVMK, and Zoom Video Communications. While there are no guarantees that any of these companies will ultimately be acquired, Salesforce is interested enough in what they do to establish a position.

Disclaimer: This article is originally published on Fool. AwasQuality does not take any credit and is not responsible for the information shared in the article.